From RK Black to Dave Polhemus: Thank you and farewell!

After 31 years in the print shop, working the presses, trimming print jobs, running copies, binding booklets and so much more, it was his last day. Dave was retiring.

Before sharing a meal celebrating Dave and his retirement, Dave’s coworkers complimented him. Some called him the heartbeat of the print shop’s operation. Others spoke of his vast knowledge of print and willingness to use it to help. Others told of his eagerness to try new things.

“I’ve told Dave this many times. I would rather have one of him than five new guys any day,” RK Black Office Production Manager Kris Russell told the team, after saying he had always been impressed with Dave’s work ethic.

Later when asked what he is going to do in retirement, Dave said he wasn’t sure, but will probably help his wife at her flower shop and will continue his model airplane building hobby.

“I will build them. I will fly them. And I will wreck them,” he said, with a chuckle. 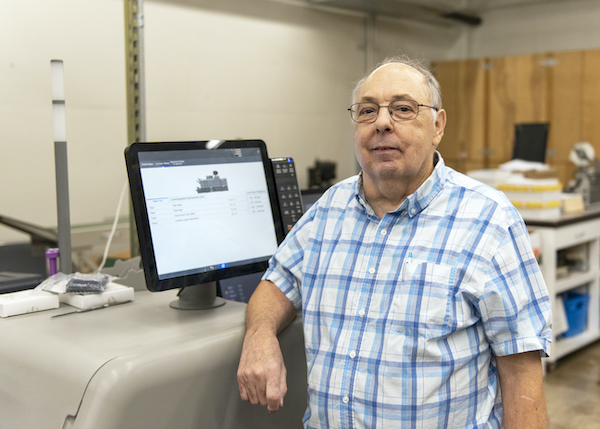 From "Penn" to the press

Born in Pittsburgh, Penn., he moved to Montana, then Tulsa and finally Edmond where he graduated high school.

It was after he had gotten married and was studying at the University of Central Oklahoma when a job became available at the school’s print shop. He applied and landed the job. Until Friday, had been at the print shop since — first working in production and then running pressman. After taking a couple of years’ break, he returned to the shop as the director of printing. As a manager though, he missed working in production and being hands-on with the equipment.

Later, when RK Black took over the print shop nearly ten years ago, Dave returned to work he so loved — working in production, running the presses, making copies, binding booklets and so on.

Dave said he has enjoyed the job since, saying the owners, Chris and Cynthia Black, were always good to him and how he enjoyed working with his manager, but how he really enjoyed the work.

“It was just nice to get out of managing the shop and to get back to the hands-on stuff,” he said,

He noted how over his years in printing, he’s seen printing equipment move from heavy, letterpress machines requiring typesetting and leading, to offset printing, to now digital printing.

Dave recounted how one of his first jobs at the print shop was to line the type with lead, making for heavy, painstaking work.

“Now you push a button and it tells (the presses) from the computer what to do,” he said, explaining though that while producing jobs is much easier, fixing the machines is less so. The original offset machines, being entirely mechanical and no software, were simple to repair.

“If something went wrong, you could a lot of times trace it down, and this sounds bad, but fix it with a rubber band or paperclip. Now, you just have to call service when something goes wrong.”

Now in retirement, while Dave no longer needs to concern himself with press machines, doubtless he will set his hands to something — whether building more RC planes or arranging flowers with his wife.

Thank you, Dave, for your many years of devoted work … We will miss you! Please stop by and see us, OR we will have to order flowers from A FLOWER PLACE and ask that you be our delivery guy!!!