From RK Black to Gary Leonard: Godspeed and happy trails!

You might have heard the saying that goes something like “Life is a journey.” While some attribute it to Ralph Waldo Emerson, others say it may have come from a text written in 1855. But no matter the source, the idea is life is a series of stops meant to be enjoyed for a while and then left for the next adventure.

For Gary Leonard who has spent much of his life on the road as an RK Black field service technician driving between client locations maintaining and repairing office equipment, life has very much been a journey, and it's now time to set course for a new destination. 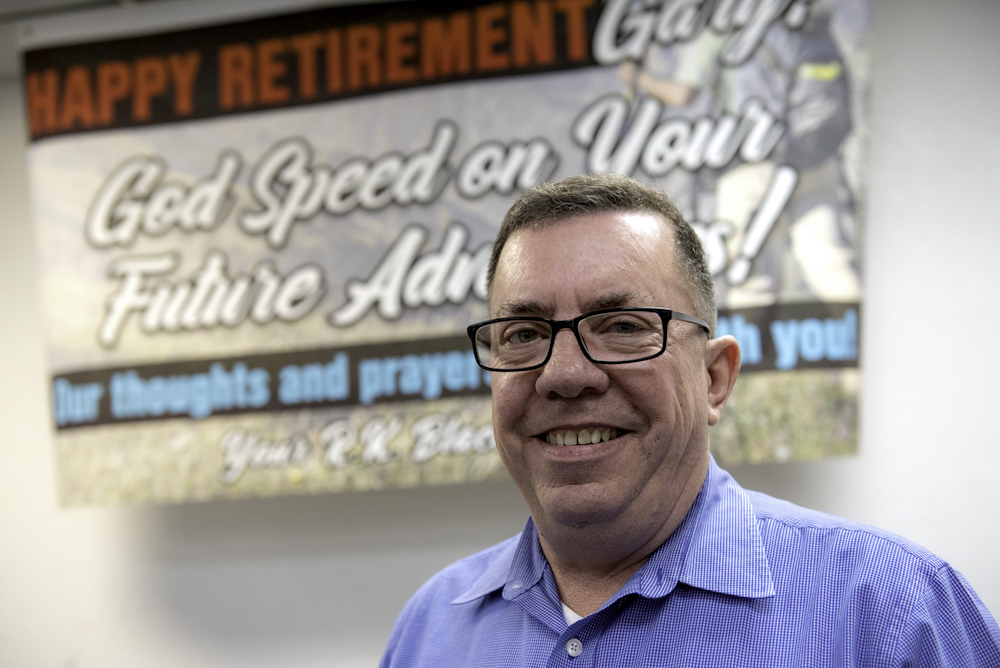 Today, after more than 34-and-a-half years of service, the now field service manager is retiring and is — quite literally —heading out onto new roads to see new sights and experience new things.

“I’ve got a vacation planner lined up that’s going to take the next five years,” Gary pronounced excitedly with a bright smile. His travel plan, drafted with the help of his granchildren, includes many sites throughout the States, cameras in hand and, for some of the trips, grandchildren at his side.

Among the destinations are places in Colorado, Montana, Florida, Tennessee and the Grand Canyon, with a goal to photograph as many landscapes and animals as he can.

“On all these trips we’re going to be fossil hunting and things like that,” said Gary.

“Then we have 47 trips to do around Oklahoma,” he said, remarking he never knew there were so many places to go in Oklahoma. “That’s going to take a lot longer. There are places I’ve never heard of.”

This will not be the first time Gary has travelled far.

A Texas native, after the third grade Gary moved to Moore, Oklahoma where he grew up. After starting college and working in the oil field installing blow-out preventers, he joined the United States Air Force. There he served for four years, two of which he spent in Okinawa, Japan, working as an F-15 avionics specialist.

Gary Leonard and RK Black: How it all began

It was 1984 when, fresh back from Okinawa, out of the United States Air Force and back in Oklahoma, Gary began looking for work — something to pay the bills until he found out what he really wanted to do in life. An employment agency referred him to RK Black, a company he said he had never heard of before,

Gary went to interview for the job and right there was asked if he wanted to work on microfilm machines. “I had no idea what that (microfilm) was but I said ‘Sure, I’ll do that!’ That’s how I got started.”

Repairing and maintaining microfilm machines is what Gary did until some years later microfilm started giving away to newer technologies. It was then when Gary transitioned to working on HP printers and faxes, and eventually became a color specialist.

“That was 20 years or so ago,” said Gary. “From then on, the only thing I’ve done is color and production. Ricoh and Sharp. I did all the networking.”

Asked what kept him at RK Black all these years, Gary answered how he enjoyed getting out of the office and meeting people. But also, he spoke of the company’s culture, how there is prayer at company meetings and how client care is so highly regarded at RK Black.

He recalled how when he first started at RK Black, Chris Black was taking over as president as Bob Black, Chris’s father and the founder of the company, began stepping down.

Gary said during this time occasionally Bob would go with Gary on service calls to client locations and after completing that call would review with him what he could have done better.

“Mr. Black would call me and occasionally say, ‘Hey what are you doing? Would you mind if I ride with you?’ Of course, he owns the company. You can’t say no.”

He said these ride-alongs, though a bit uncomfortable at first, helped him grow into being a better technician and to provide better client care.

Gary recalled how once they left a client’s location after completing a call and Bob asked him, “Okay, what did you miss in there?”

“I don’t know,” Gary remembered saying, thinking then with all the work he did, he had left the machine practically shining.

Bob would then go on to tell him there was a fax machine in that office and that that was a sales lead.

“That’s why I was turning in sales leads all the time. It became a habit to look around for stuff.”

“There was so much stuff he would tell me back then with the meetings we would have,” said Gary.

“He told me if you only fix a machine, you are only doing half your job. The most important half is taking care of that client. He stressed that so much. There was a lot I learned from him. To him, you’ve got to be honest and take care of the clients.”

It's all about caring: Same journey. Different road.

Gary said after all these years he has mixed feelings about retiring, especially as he sees the company really starting to grow.

“You want to stay here and go into the new building — to be part of the growth,” he said. “But at the same time for personal reasons, I need to get out and start doing some things.”

“Go to the zoo, taking dad to Texas, camping at Blue River and who knows from there,” said Gary, listing off his planned adventures for the first few weeks of retirement.

“I am looking to volunteer someplace, but not sure where,” he said, saying he’s thought of helping out at the zoo or maybe the Children’s Center in Bethany. “Lots of places I’ve talked about, but I am not sure what I want to do. But I would like to volunteer and help out somewhere.”

Gary said the success of his last five years as field service manager he credits to his team of service technicians.

"They busted their butts and I just want to give kudos to them."

That caring heart that kept Gary at RK Black for so long caring for clients is the same heart carrying him to paths where he can spend more time with his family and care for others — all while making new adventures and memories.

Gary came to RK Black while looking for what he was going to do for the rest of his life. It would probably be safe to say that he did find what he sought: All he wanted was to care for people. And that is what he did ... and will continue to do.

Happy trails and adventures, Gary! Keep in touch and send us pictures!