From RK Black to John Sanders: Thank you for your outstanding service!

For some, retirement is like going on a permanent vacation. For others, it’s just a change in the pace of life. But for John Sanders, having worked at RK Black, Inc. for more than four decades means something much deeper.

Last Monday was John’s last day at RK Black after having celebrated his 42nd work anniversary in February. During this time John has served in many roles including field service technician, service manager and our always-helpful internal IT resource. 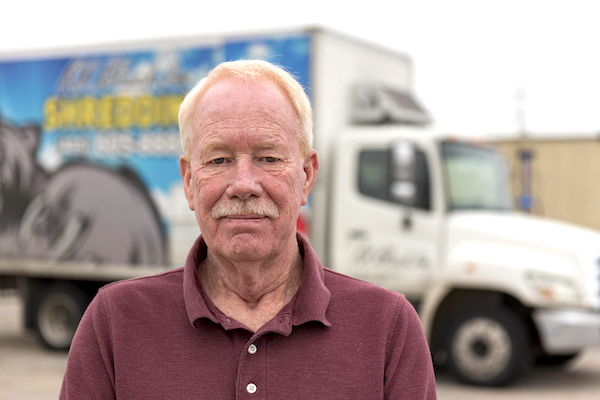 From OKC to RKB. From Service to IT

Born in Altus, Okla., John moved to Oklahoma City when he was in the 6th grade. After graduating high school and gaining an interest in the growing electronics industry, he enrolled in several electronics courses at a local junior college to earn an associate's degree. John was about six or eight months into his studies when RK Black hired him as a service technician.

“I worked on almost all the products in the copying/duplicating lines, the 16- and 35-millimeter micrographics products and audiovisual,” he said, recounting his earliest work at RK Black.

After a few years John became the assistant service manager and then, seven years after being hired, he was promoted again, this time to service manager.

“We grew so much that we ended up having to split (the service department) and I did the faxes, microfilm and Ricoh copiers and we had another service manager who did the rest of the equipment,” said John, recalling changes in the service department during his time as manager.

Thanks to technological advances in the document imaging industry, John next found himself performing more and more IT-related tasks — even installing his first network at the office.

“The guys nowadays — they don’t recognize any of the terminology that was used back then. Everything changes,” said John. He remarked how at one point he was the company’s only person installing copying, printing and other office equipment devices on client networks.

“If we sold a copier and they wanted it hooked into their network for printing or whatever, then I was the only one that was doing that.”

From IT to Grandfathering

Eventually, both internal IT and video surveillance were rolled into the company’s managed IT services division and John’s role morphed yet again into one of assisting with internal network security. It was around this time John started thinking about retiring — leaving the RK Black family so he could spend more time with his own growing family.

“We've got a two-year-old grandson at home who takes a great deal of our time, I'm helping my wife raise him.”  Getting to spend more time at home would allow John to take a more ‘active’ role with him.

“I have a lot of fun with the little guy, we’re best buddies. I've got a new best friend, he’s a hoot,” said John, adding his grandson will be three years old next month.

Other than being with his family, John said he is considering taking some gun courses.

“I may end up trying to get the certification for being a (firearms) instructor, but that’s down the line a bit.”

Asked what kept him at RK Black so long — for 42 years — John said it was due to the fact RK Black was a family-owned organization that cared about their people.

“I did get a couple of offers from other competitors calling that wanted to hire me, but like I said, Chris and Cynthia (the owners), they’ve been so good to me and everything that that wasn't even a consideration.” On Monday, Chris and Cynthia threw a farewell party for John, serving up lasagna, chicken alfredo, an ice-cream cake and lots of laughs from stories over the years.

The company gave John a new iPhone as a parting gift “so he could stay in touch with us” as Chris explains. “Over the years I’ve jokingly told John that he couldn’t retire until I did so maybe I need to start thinking about my own retirement too … nah! On a serious note, John will be greatly missed, he is such an outstanding person, always taking care of this company and always going above and beyond … we have been very very blessed to have him as a part of our business family. I’ll especially miss his humor … I sent him a text the day after his retirement celebration that said ‘Do you miss us’ and he responded ‘Chris who?’ … that’s our John!”

John, thank you for 42 years of outstanding service to clients and co-workers (and for your humor), we wish you all the best and look forward to seeing you ride up on your Harley when the weather is nicer for a visit. You are and will always be part of our family and part of our hearts!