If you’ve looked at the R.K. Black Facebook page recently, especially any of the recent photo albums related to our participation in the Central Oklahoma Heart Walk, you’ve likely seen the face of one man throughout the albums.

In one photo, that man, John Sanders, our director of IT and data security, is holding up a red shirt, the one our walkers wore in this year’s Heart Walk, and printed in white on its front is an image of his face and beside it “R.K. Black Joins John Sanders. Kiss Heart Disease GOODBYE!”

A Bad Valve 40 Years in the Making

When it comes to heart disease, you could say quite literally, he’s been there, done that and got the t-shirt.

A little more than two months ago, John was stretched out on the operating table at Integris South, his heart stopped, a heart-and-lung machine pumping away keeping him alive as surgeons worked through his open chest on his stilled heart.

They were replacing a defective heart valve, the mitral valve (also known as the bicuspid valve which lies between the left atrium and left ventricle).

64-year-old Sanders learned about the bad valve four decades ago during a physical as he was enlisting into the United States Marine Corp. 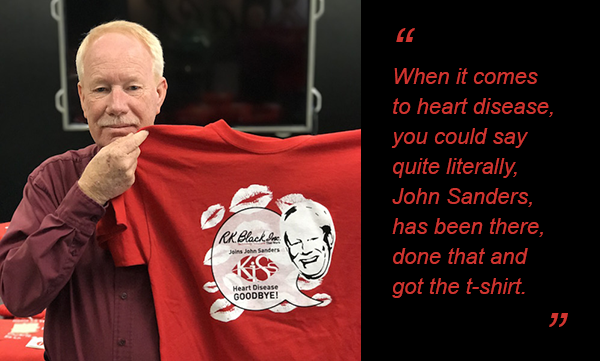 During the 40 years since, the issue really was of little concern for John until a doctor’s visit in December when after having had performed a few EKGs on John, the examiner reviewing the results showed a look of alarm in his face and pronounced, “Your doctor needs to see this.”

The report having sent been to his doctor, John went in for another test.

“The next thing I knew was this guy was standing over me and said, ‘I‘m your surgeon. I’m going to schedule you for a valve replacement.’”

It was not long after that meeting when John and his father were at a gun show and John had to step to the side and rest, “I felt like I had just run a marathon,” he said, saying these bouts of fatigue and weakness were becoming more frequent.

“I knew I was having problems. I was feeling bad, had no energy, was very tired and couldn’t walk. This is not good.”

But the fix was on the way.

From Pitiful to Pink

On January 31, he went in for his surgery.

“I remember them wheeling me in, and a guy standing over me telling me. ‘Hi! I am your anesthesiologist,’ then I was out.”

After a 5-hour surgery during which doctors went in and cut out the old valve and sewed in a bovine valve as a replacement, John was wheeled into the ICU.

When he regained consciousness, he noticed he was tied down, was on ventilation and had all manner of wires and tubing coming from his body.

After three days in the ICU, on the seventh day after his surgery John went home.

It was on that last day in the hospital he was finally able to get up and walk, though “not very well. Not very fast,” said John.

Following a month of recovery at his home and even celebrating his 64th birthday a few days after returning from the hospital, doctors released him to return to his work at R.K. Black — and return he did on March 8.

Now, after nearly a month-and-a-half back at work, John said while he doesn’t feel 100 percent — adding that the doctor said that would come only after three months — he said he is feeling better every week.

John remarked that during a recent check-up, his cardiologist told him he looked pinker.

“I didn’t think I was doing that bad beforehand. I guess pink is good,” he said with a smile. 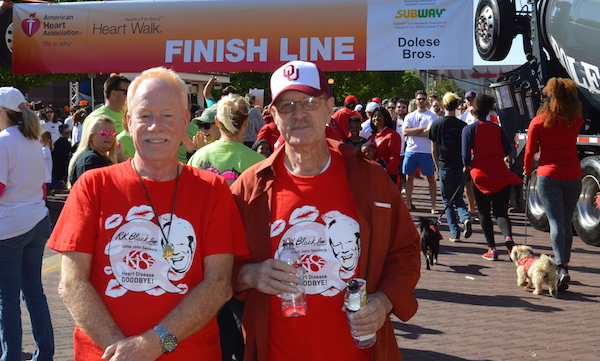 Another mitral. Another mile.

Red is good too, because on the day of the Central Oklahoma Heart Walk, just last Saturday, John and his 82-year old father donned red shirts emblazoned with his visage and on the back “valve. version 2.0”, joined others from R.K. Black and walked a mile to help raise awareness of heart disease and strokes.

Asked about what he thought about being the “poster guy” for R.K. Black’s Heart Walk fundraising this year and having his mug on the t-shirt, John replied he is not the only one here at R.K. Black who has struggled with heart disease, or even a bad mitral valve.

“I’m just the most recent benefactor of the technology of today. 75 years ago I would be dead,” said John.

“I’m just glad to get (the surgery) over with behind me. I don’t think of myself as a poster child.”

And he shouldn’t because he’s our poster guy. He’s a symbol of why the American Heart Association’s Heart Walk fundraising event is so important for us.

It’s like how John said, if it weren’t for today’s technology, he wouldn’t be with us.

It’s why we as a company are so grateful to support organizations like the American Heart Association that work so hard to fund the development of technology such as John’s new heart valve to kiss heart disease goodbye.

Though the Heart Walk event is actually over, our fundraising has just begun.

Have documents to shred, an appetite and a few bucks to give toward increasing heart disease awareness and eliminating heart diease?

Stay tuned for a Friday shredding event to be announced soon — hosted at R.K. Black headquarters where you will be able to stop by, shred your old tax documents for a donation and grab a bite to eat with all proceeds to go to the American Heart Association.

While we are still working out the day and time of the event, please enter your information in the form below and we'll make sure you are among the first to know the event details when we have them.

Thanks for signing up!