A Day in the Life: R.K. Black Service Technician

A R.K. Black service technician on the move in one of our two-dozen Toyota Prii.

What’s black, white and read all over? Our fleet of black Toyota Prii (yes, Prii, according to Toyota) emblazoned with the R.K. Black logo — that’s what. Thanks to this armada of vehicles, people in central Oklahoma know our name and our logo, but many people don’t know what these automobiles or the people driving them do.

The Mustache Behind the Wheel

Today, I am introducing you to one of these people, a mustachioed man some know as “DFoss,” “Foster Child” or more recently, “Mr. Hollywood' (to understand the latter, click here), but whose actual name is Dwain Foss. Dwain has been with R.K. Black for more than eight years, most of that time spinning screwdrivers, turning wrenches and popping copier panels or behind the wheel driving to the next client location to do the same. 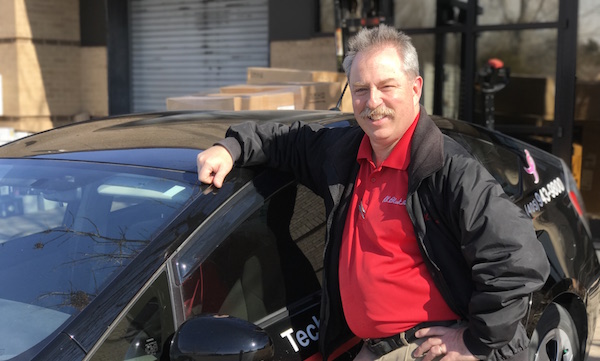 When he’s not doing that, he’s spending time with his family — his wife, three grown kids (now out of the house) and two grandchildren and regularly enjoys working as a referee or umpire, reading Tom Clancy or Dean Koontz, or playing Call of Duty on his Xbox.

Born and raised in Oklahoma City, an alumnus of Grover Cleveland and Living Word Academy, Dwain married shortly after graduating high school and has been everywhere since. One week after marrying his wife, he enlisted in the U.S. Air Force which, as it does to most servicemen, sent him from state to state and country to country. By the time he got out of the service 12 years later, he had lived in Texas, Mississippi, Nebraska, Colorado, Italy and South Korea before coming to Tinker Air Force base here in Oklahoma City where he finished his enlistment.

His time in the service had him first performing warehouse duties, but then transitioned him into maintaining various electronic systems ranging from computers and tactical communications devices to IBM mainframes and tape drives.

From the Service to Service

After his active duty (and subsequent reserve) enlistment, Dwain began what would become a 10-year stint working a Valvoline oil-change shop in Oklahoma City, at first as a technician and then moving up to shop manager — a role he held for four years. It was during these latter years when his interests turned toward R.K. Black, the workplace of Kevin Schuler, his best friend since the sixth grade at Eisenhower Middle School.

Foss had applied to work there before, in the warehouse, but after not hearing back for nearly a year, he received a call from Kevin inviting him to lunch. It was there that Dwain got his “in,” Kevin telling him about another job and convincing him to apply. A month later, the fall of 2008, Dwain was managing inventory and doing deliveries at R.K. Black. A year later, Dwain applied for a job in service and thus began his life as a service technician — a role he still plays and enjoys to this day.

“I love what I do. I like working with my hands. Even working on the same pieces of equipment all the time,” said Foss.

Service: It's Not Just Fixing the Machine

Foss said his philosophy for working with clients he inherited from the family of service technicians at R.K. Black who knew the late Bob Black, the founder of R.K. Black, Inc. Foss said he had heard Harry Lemme, a tech who has been with the company nearly 50 years, repeat something Bob used to say, something he has taken to heart, “If you fix a machine, you are only doing half the job. You’ve got to fix the client too.” 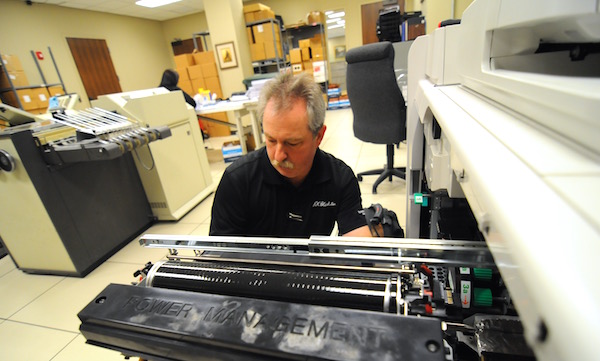 Explaining the phrase, Foss said it is much like the adage about feeding a man by giving him a fish, or teaching him to fish so he can feed himself for a lifetime.

“You’ve got to train your clients with what they can and can’t do with the equipment,” said Foss.

He recounted one story from his Valvoline days, when an oil-change customer returned to her home and called the shop saying her car showed no oil on the dipstick. When Foss drove to her home to look into the situation, he saw her car parked on a steep driveway. He then showed her how with the car parked as it was, the oil had flowed to the lowest part of the engine, away from the dip stick, making it appear the engine had little to no oil. The customer learned that day to park on a level ground before checking the oil, a lesson she would likely remember for the rest of her life.

Similarly, often copier technicians are called to client locations due to paper jams or other issues and sometimes the issues are more about educating the client than fixing hardware.

“Sometimes (clients) will have jams coming out of their paper trays,” said Foss. “The technician will arrive and see the one corner of a paper stack in the tray with a corner folded up or down. Well, it raises up the stack on that side and it doesn’t feed properly. You show them that. It’s teaching your client how to load their paper in the tray correctly.”

He said sometimes paper in the feeder tray gets folded up in front of the stack, becoming a dam and stopping the paper from feeding.

“When you’re loading paper, you don’t think about that. That’s something we are looking for … or you get lines on your scans or copies and you have something on your glass. I’ll show them how to find that. The technician will be like ‘This is what you do to find that.’ That’s the biggest thing — we are just trying to keep them running,” he said saying if technicians can help their clients help themselves, it’s a good thing and it pays off.

“Ultimately, (the clients) appreciate it because you are helping them understand something they didn’t to begin with.”

The Squeaky Machine Gets the Elbow Grease

Though a skilled technician, Dwain has found copier repair can be a lot like automotive repair — you fix a problem only to discover that it wasn’t the problem — something else was.

The day I rode with Dwain, he was called to a print shop for a client north of Oklahoma City where an Océ VarioPrint 110 was squealing. Meeting us at the door was a gentleman who lead the way to the print production room where the loud, nearly brain-curdling whirr could be heard piercing though the door. Inside the room, the sound was nearly deafening. Dwain strolled to the machine, homing in on the source of the racket and got right to work, shutting down the device, popping open the machine’s maintenance-access doors and unlatching and sliding out the spiral cleaner assembly. There he found melted toner caked up around the upper and lower spiral cleaners, the toner having caused the lower cleaning spiral to seize and the machine to squeal. It’s what had happened before on this machine.

Tackling the apparent cause of the problem, Dwain freed up the old spiral cleaners and replaced them, but determined part of the counter pressure assembly needed to be replaced as it appeared a flaw was causing the toner to spread outward to the ends instead of inward to the center of the cleaner, causing the them to overflow and eventually to seize.

After putting everything back in place, Dwain fired up the Océ and there again was the squeal. Reopening the machine, he determined the sound was coming from a fan underneath near the motherboard in the back of the machine and placed that fan on order along with the new spiral assembly. The parts would arrive in two days and problem solved, right? Wrong.

A few days later, Dwain parked at the client’s location, strode in with the new parts, installed them and fired up the production printer. While the new counter pressure assembly worked beautifully, the squeal, much to his chagrin, made itself known, loud and clear. That was when he found a fan located below the one he had just replaced, though concealed by the motherboard that was the real culprit. A few days later, that part was in and the squealing was gone.

“A lot of times this work is a lot of trial and error,” said Dwain, saying sometimes he has to take an educated guess on issue causes, eliminate those possibilities until the matter is fixed. Most of the time he gets it right and sometimes he doesn’t.

But all the time, he enjoys the puzzle of solving the problems and even more, the satisfaction and gratitude he gets from clients upon fixing a problem.

“For me its awesome because you walk in and your clients are at their wits end and they are like “I love you!” or “It’s about time!” But then you fix it and they’re all, I love you! Thank you! You did a great job!”
​

“We’ll get accounts where we have a person that says they only want this technician or that technician to work on their equipment,” said Dwain, adding with a chuckle that some clients have jokingly barred him from taking time off. “When I let them know I’ll be gone for a few days, some will tell me, ‘You’re not allowed to go on vacation!’”

“It’s nice to see when people appreciate you and your work,” he said. “That tells me I am doing something right.”

That’s Dwain Foss for you and that’s just one of the drivers behind the wheels of the black, white and red Prii you see running all over central Oklahoma.

As Paul Harvey, himself an Oklahoman, would have said ... "And now you know the rest of the story."