Soundpony Cyclocross presented by R.K. Black: It's about competition, collaboration and kinship

Cycling is the new golf. That’s what some popular business journals are saying, explaining it is the business networking activity of choice for today’s young professionals.

Why? Well, there are lots of theories, but the consensus seems to be the idea that while golf is competitive, cycling couples competition with collaboration — the sum of which builds toward something greater than friendship.

For example, on long-distance group rides, a cyclist may push to the front of the pack and bear the brunt the wind, allowing those behind to ride in the slipstream until they feel strong or rested enough take the lead and themselves face the wind, this interplay and sharing of the load building camaraderie and friendship between cyclists. This, as opposed to golf where the competition between individuals, especially in business, is such that a win or loss by either party could mean a lost deal, not to mention a friendship, as an example.

So why is it an office technology company is writing about cycling, you may ask?

First, a few of our own associates are involved in the sport, our VP of sales and service, our director of service and even our president, Chris Black, every once in a while donning the Spandex and hopping on the saddle. But second, two years ago R.K. Black, being all about fitness, relationships and giving back to the community, decided to sponsor an elite Oklahoma-based cyclocross team, its members hailing from central and northeastern regions of the state.

Called Soundpony CX p/b R.K. Black, the self-described team of “five Okies” wearing their neon yellow, R.K. Black logo-emblazoned jerseys has been leaving its mark at competitions throughout the nation. For example, Tulsan member Jake Lasley took the national championship for the 2015-2016 season and Moore resident and team member Chris Drummond, third place in the Masters 30-34 National Championship in Asheville, N.C. the same year. It hasn’t stopped there. Just this past January, Drummond went on to claim the national championship in Hartford, Conn. 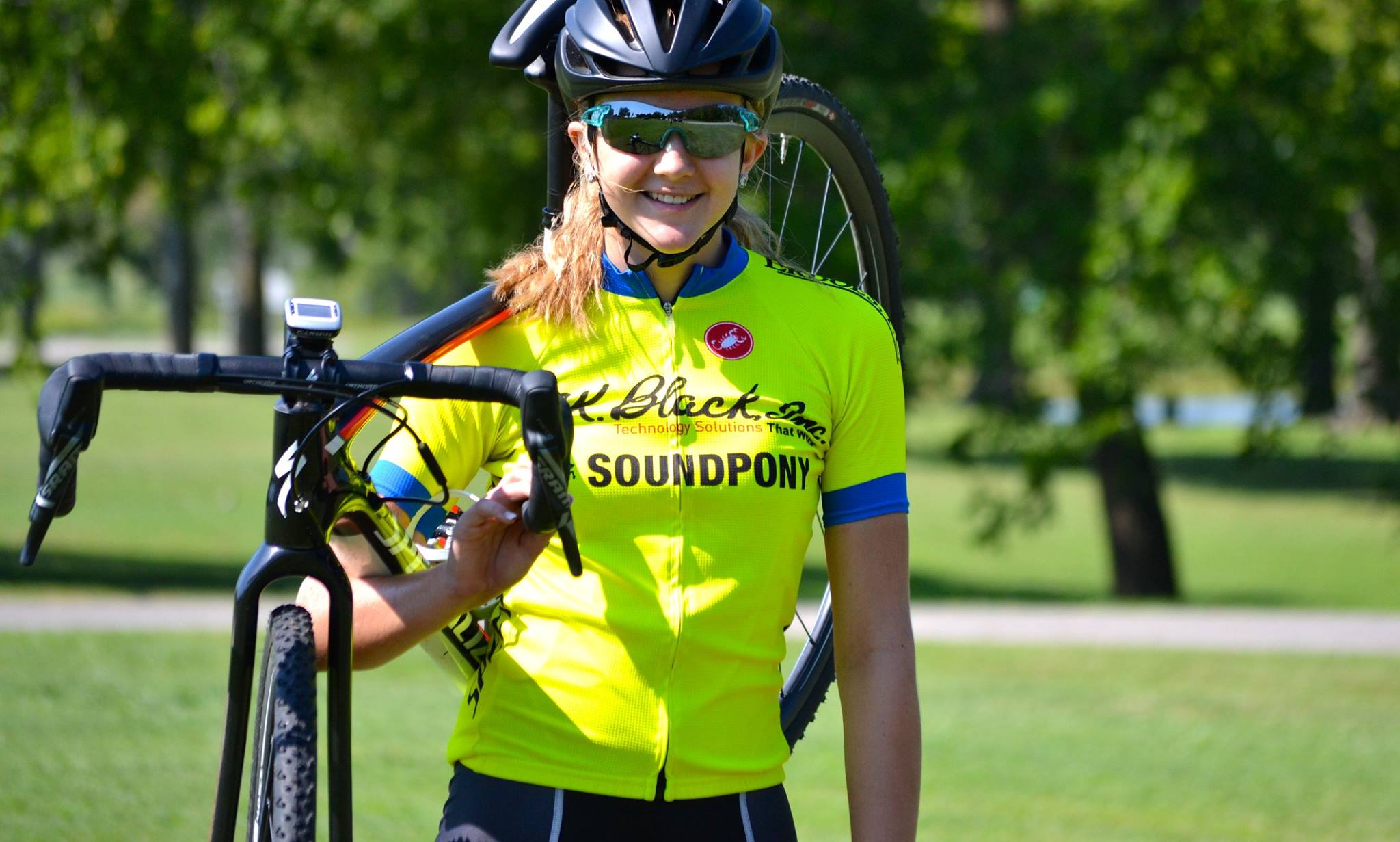 If Chris standing tall on that podium was like a tree, then Aubrey Drummond, his 14-year-old daughter, is the proverbial apple that didn’t fall far from it. Behind the handle-bars since age 5, having then been inspired by her father’s devoted cycling, Aubrey last year joined the team, no longer satisfied with kids’ cups and end-of-the-road-and-back-again jaunts. She wanted to roll with the big boys and roll she did.

Last year she traveled all over the country, competing with the team in Wisconsin, Kentucky, Iowa, Ohio and Connecticut, but also in the more local races here in Oklahoma — Ruts ‘n Guts in Tulsa and the ProAm Classic here in Oklahoma City, among other events.

So what does she get out of it? She said she enjoys the obstacles, the weather, but more the “race in anything” kind of attitude of the sport.

“Nothing stops the race,” she said, recounting how SPCX p/b R.K. Black slogged through the slippery slush last January in snow-covered, icy Connecticut for the National Championship race.

It’s that same “Nothing stops the race” attitude that has kept her on track at school and in life since cycling, according to her mother, Vanessa Drummond, as the sport has really helped her daughter learn about priorities and responsibility as she daily does her homework and trains for cycling.

“When the decision comes to go to the game, to a dance or do other activities, she always chooses cycling,” said Vanessa, adding how Aubrey now considers the consequences of staying up late or eating unhealthy food thanks to her love for cycling.

And how has all that sacrifice and hard work paid off? Aubrey recounted her thoughts upon seeing a particular contestant last year before a Category 2 Women’s race in Kentucky. She recognized her as the girl who had won nationals in her category the year before.

“In my head, I was like, ‘That girl is going to beat me.’ But I overcame (those thoughts) that weekend and got second place,” said Aubrey, adding that her rival placed third.

“I was really happy with that,” she said. 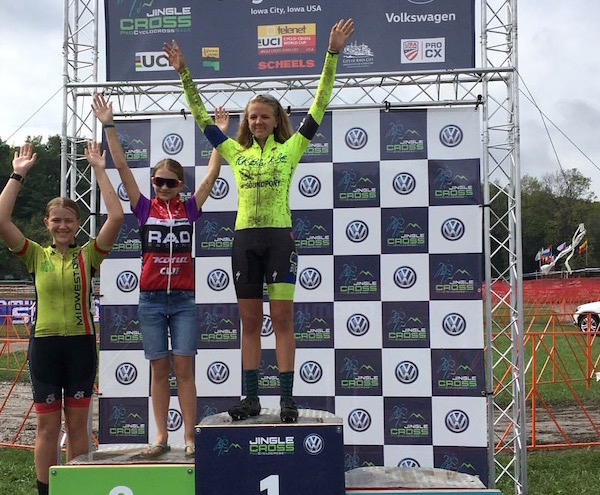 Though pleased with those results, Aubrey is not satisfied. She has set her sights on next year’s nationals, saying she wants to stand on the winner’s podium.

“I feel like I have the chance. I just need to train,” Aubrey said.

But first she’ll race in the upcoming cyclocross competition in Wisconsin, an event that can’t come soon enough for her.

“Oh, she’s counting down the days,” said her mother, looking to her daughter.

“201 days!” Aubrey suddenly blurted, pausing then to add how she’s looking forward to seeing friends she’s made while on the racing road over the past year.

Last year, Aubrey watched as her father stood on top of the tallest of three podiums at the National Championship in Hartford as he became the second cyclist wearing the R.K. Black logo to claim the title.

The sight, she said, infused her with even more determination for next year’s nationals.

“Watching him win last year, I see (all of his hard training) differently. I know how much work he puts into it all year long. It paid off,” Aubrey said.

“I want to be with him on the podium,” she said after a pause.

So, what is cycling for Aubrey?

A lot of the attraction, according to Aubrey, is the sheer fun of the sport, but more it’s about the friendships she’s made and something more than friendship.

“Me and my team, the cyclocross team, are like family. We are close,” she said, explaining how no matter where they are in their travels together, they always rent a house and always eat dinner together, just like family. 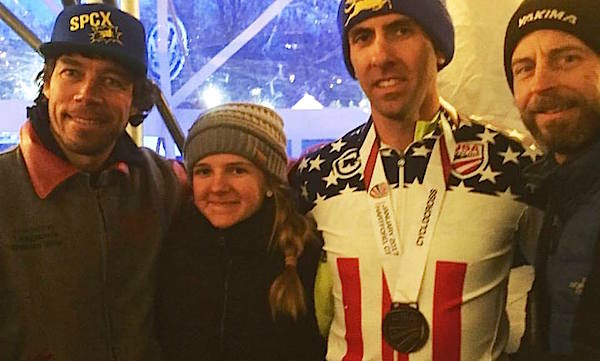 So why is R.K. Black involved in this new golf, as some hold it to be? Is it to gain new clients? If it happens, sure! To spread our brand? Well, again. Sure! But also, while we are about business, we are also all about relationships and family.

What can be better than helping to create an environment where a father inspires his daughter and where friends become family?

During the interview with her daughter, Vanessa said without R.K. Black’s support, the team’s travel would have never happened. Perhaps nor would have the degree of relationship that now exists between the team and family members. We as a company are proud to see this inspiration and strengthening of relationships come about in part due to our support.

It’s almost as if by supporting Soundpony CX p/b R.K. Black, we have in a way pushed to the front this small part of our Oklahoma community, taking the headwind, allowing those behind us, families, friends, associates, clients and members of the community, to ride in our slipstream until they have the strength, energy and inspiration to press to the front and bear the wind for those in their lives.

It’s just like one of R.K. Black’s statements of corporate intent says, “We invest our success to impact lives.” That’s what it's about — not necessarily about being the winner, but helping each other grow to be able win too.

Business Insider: Millionaire entrepreneur explains why cycling — and not golf — is the new sport of choice for young professionals

The Economist: Cycling is the new golf