From RK Black to Ruby Wilkey: We love you and we will miss you!

December has been an eventful month for our company … on Friday, Dec. 13, we celebrated our final official day at our Perimeter Center location, our home for nearly 22 years, and the same day, the retirement of a dedicated associate of nearly 27 years: Ruby Wilkey.

For Ruby, the company’s move to a new location at 4000 NW 39th Street was the perfect time to make a move of her own to newer and bigger plans, bringing to a close nearly three decades of dedicated service to the company.

Ruby and her love for her work

Ruby’s official job was in accounts receivable, a responsibility she tackled each day with a joyful zeal … her famous voicemail greetings (updated each morning) were legendary … they let you know that here is a person who LOVES each day.

Ruby’s mastery of the AR process was just one facet of her giftedness … loving people with food was another! Whether it was getting the first pots of coffee started each morning or surprising colleagues with birthday cakes (Italian Cream Cake was my favorite!) or tucking small loaves of banana nut bread in our inboxes during the Christmas holiday or even baking cookies for a client who had tracked down a tardy payment the message was clear … Ruby LOVES to do for others.

Then there’s the mischievous side of Ruby, often preceded with a certain glint in her eyes … she LOVED to surprise people (as in GOTCHA!), hiding behind a door or around a corner and then springing forth on her unsuspecting prey, not really to scare but to elicit laughs … and promises of revenge — which her antics almost always did.

And then back to work … Ruby was the one at company meetings you could always spot standing to the side, her eyes quickly bouncing between her watch and whoever was speaking, impatiently waiting for the meeting to end so she could get back to her phone calls, that’s how serious she was about her work. 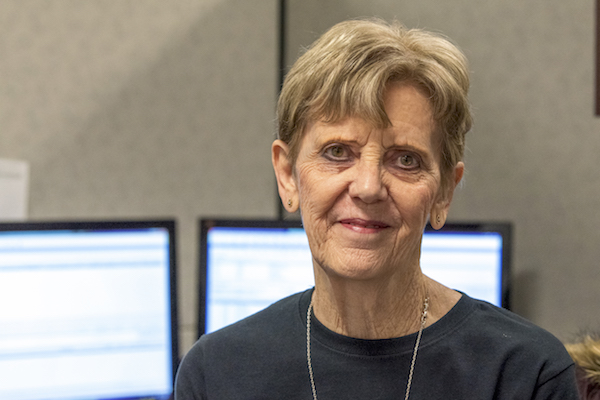 From Shamrock to OKC

Ruby grew up in Shamrock, Oklahoma and was a member of Shamrock’s last graduating class before the district consolidated with Drumright schools.

A year later she married Gene Wilkey, her husband of 56 years, and moved with him to Oklahoma City where she went to work for American Greetings for three years stocking cards at three different stores. She then shifted into retail, joining Klee’s At Casady Square where she assisted customers with gift selections, became famous in Oklahoma City for her gift wrapping skills and helped the store’s owner, Klee Black, with the paperwork. When the store closed eleven years later Ruby joined her husband Gene at RK Black and began her career in accounts receivable … “I’ve been here ever since,” Ruby said, recounting her story. “I’ve met a lot of wonderful people.”

Asked what kept her at RK Black so long, she said “I like what I did, the interaction with people and I liked how I felt at the end of the day — feeling good about myself because I’d accomplished something.”

Perhaps indicative of her tenacity and work ethic in collections is one of her hobbies — collecting golf balls. WhileGene was playing a round of golf she would search through the brush and thickets to rescue stranded golf balls.

“I was going to get that golf ball,” Ruby said, “I had so much fun doing that.”

She would then take them home, wash them, dry them and organize them by brand; later when she found a buyer, her first sale was for 6,000 golf balls!

Moving forward, Ruby doesn’t plan to just sit around; between working out at the gym, baking for friends and traveling to Kentucky to see her brother she will continue to share her wonderful brand of joy and light into this world … that’s our Ruby. Always working. Always moving. Always helping!

RK Black to Ruby: Farewell and thank you!

As a stone, the ruby has long represented power, purity and passion. As a person, Ruby exhibited all of these qualities in her work as an RK Black associate.

Everyone needs a Ruby, so now it's time for us to share her with the world.

We love you Ruby and will miss you … your work ethic, your energy, your antics, your always helping hands and your conscientious soul. May God bless you and keep you in all the days ahead.